“We need milk!” The little ones screamed. “Please, people we need milk out here!” The kids were now pleading with the incredibly cordial Howlin’ Ray’s counter staff. “One milk!” Cried out the line cook behind the counter. “One milk!” Echoed someone back of house.

Three hours earlier.
Laz, mom and I got there first, about 2:45p, line already coiling around the old chinatown plaza. We got in line behind a young Vietnamese guy, 19 maybe 20. “How long have you been in line?” I asked, “maybe 30 mins” he answered, “but from the point where we’re standing, it will probably only be about two hours.” There were days the line was recorded to be five hours long. He was prepared though, playing video games on his iphone. “But this is my third time here,” he went on. Then, anticipating my next question. “It’s worth it.”

Zaya and his kids arrived shortly after. He and I walked the line, while mom grabbed a

table with the kids. He and I were getting the lay of the land and checking out what sort of food options were available to enhance the wait. I’d already taken Jonathan’s recommendation and got a caffeine fix from Endorffeine. Laz grabbed a milk shake from Scoops, Zaya grabbed a couple pork belly bao’s from (wait for it) Baohaus. By then, one of our oldest family friends, Ben Merlis had joined us. Waiting in line is nothing if you’re catching up with cool people you love.

Benji, a long time vegan, was not on the Howlin train so he opted for some tofu Bao, and caught us up on his book, ‘Cold Chillin’ that he was procrastinating writing by standing in line with us. Between that, watching the other dedicated’s waiting, and eyeing those sitting at the long, communal tables unpacking their orders, giving us a peak of what was to come, the wait flew by. 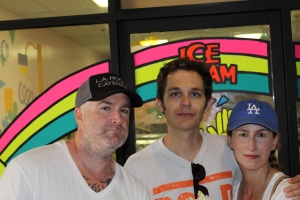 Sure enough, we were coming up on two hours. By then dad had joined as well as Matt and Esme, with uncanny timing, showing up just as I stepped up to order. I had a list. Everyone working at Howlin’ Ray’s were total pros. The kind of attention and service you hope to get and when you don’t, makes you second guess the reputation of a restaraunt. The team that worked there were there to tell you, this tiny hot chicken joint, deep in the heart of LA’s China town, was legit and they were proud to work there.

“Can I see your list?” the server asked as Laz and I approached her, Zaya behind us. I handed her my phone and she entered it all in on her screen. “Who’s getting the wing at howlin hot?” She asked, incredulous. I pointed to Laz. “Why would you want to do that?” She asked him. “I feel like if I’m here, I’ve got to try it,” he replied confidently. “You got plans the next two or three days?” she asked him. “I don’t have school tomorrow.” he croaked suddenly a bit nervous.
The server then noticed Zaya’s LA Roots catering hat. “You work there?” she asked him. “Oh, that’s my company” Zay replied. “Cool. Industry discount for you guys” she said without looking up. This was definitely a place where food and those who worked with it were respected. “Chef in the house!” She called out to the line cooks as she grinned at my brother. “Respect!” they shouted in unison.

They called our number. Food was doled out to our table in a frenzy. Sandos in mild and medium, quarter bird for dad, collard greens, macaroni salad, slaw, shake fries, peach tea and extra comeback sauce. It was so very good. I didn’t have a hangover, but if I did, this is what I would want to eat. The Chicken perfectly fried and red with spice, crispy and juicy and very messy. Never enough napkins. White bread bun sitting as the perfect counter to the fried chicken, a not too sweet vehicle layered in slaw. Laz ate his medium Sando, but like a punishment you know is coming, we all felt the tension of that hot wing waiting on the table. 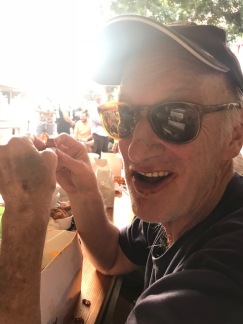 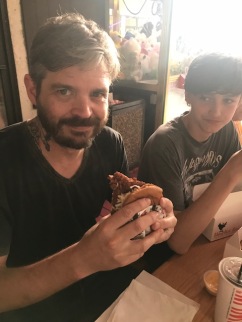 It was time. Laz pulled on the blue, latex hospital gloves, requisite wear with the howlin. And as I yelled out to the line of waiting patrons (that line was a constant) “he’s going howlin!” All eye’s were on Laz as he took his first bite.

In his review Jonathan Gold describes his Howlin experience, “the punch of heat lands — you may experience it as a blow to the chest. Your lips swell. Your scalp erupts in sweat. Your throat begins to close.”
Laz took a bite and before he let it settle, took another. Rooky mistake. What happened next was a series of strained but animated expressions. A smile, a cough, a gag. He stood. He sat. “I need milk.” he said. “Mom! I need milk!” I ran into Ray’s, trailed by Esme, Mia, August and little Isla. He guzzled the milk. Paced a little. Then ran. Everyone in line grinning while they tracked him. Then he hurled. Throwing up several times in the industrial trash can by the mens rooms. His body rejecting the wild poison this teenage boy thought might be good to eat. 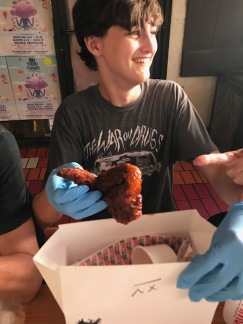 The howlin trauma called for boba drinks and Matt took all the kids for icy, too sweet taro, coffee and strawberry drinks while Laz found his equilibrium. The line to Howlin’ Ray’s continued to grow.

Another great day deep in the historical heart of L.A. 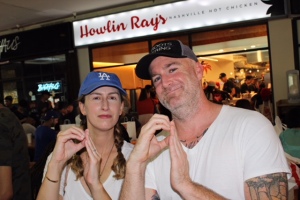